Buckinghamshire Healthcare NHS Trust signed the Armed Forces Covenant in November 2019 committing to fair treatment for those who serve, or have served in the military, and their families.

The Armed Forces Covenant is a promise from the nation to those who serve. We will do all we can to ensure they are treated fairly and not disadvantaged in their day-to-day lives. This includes offering injured servicemen and women and bereaved families extra support where appropriate.

In this section
Principles of the Armed Forces Covenant
Veteran Aware

In April 2022 the Trust received ‘Veteran Aware’ status, from the Veterans Covenant Healthcare Alliance (VCHA). VCHA is a group of NHS healthcare providers in England committed to providing the best standards of care for the armed forces community, based on the principles of the Armed Forces Covenant.

The Veteran Covenant Healthcare Alliance (VCHA) is committed to improving Armed Forces and Veteran care whilst raising standards for all. Over 100 NHS providers in England are now Veteran Aware accredited and the VCHA aims to have all Trusts in England accredited by March 2023 at the latest. Find out more about its work and about rehabilitation. 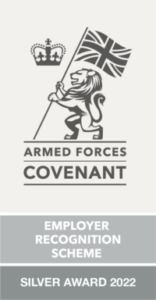 In June 2022 the Trust was awarded the Employer Recognition Scheme Silver Award for supporting the Armed Forces community.

The Defence Employer Recognition Scheme (ERS) encourages employers to support defence and inspire others to do the same. The scheme encompasses bronze, silver and gold awards for employer organisations that pledge, demonstrate or advocate support to defence and the armed forces community, and align their values with the Armed Forces Covenant.

As a Silver Award holder the Trust has undertaken the following commitments:

In February 2022 the Trust was awarded the Employer Recognition Scheme Bronze Award for supporting the Armed Forces community.

As a Bronze Award holder the Trust has undertaken the following commitments:

Other sources of support

Central Government provide a number of support services for members of the Armed Forces and their families. These include a service pupil premium, help with changing careers and a Forces Help to Buy scheme.

The NHS mental health and wellbeing service supports veterans who have left or are due to leave the UK Armed Forces. The service assesses the veterans’ needs and aim to help them get the right support. This includes support for mental health issues including PTSD, depression, anxiety and anger. For full details visit the website. The centre in Berkshire covers residents across a number of counties including Buckinghamshire.

SERFCA provides support to the armed forces in the South East of England by:

Veterans Gateway is funded by the Armed Forces Covenant and offers support to veterans on a wide range of matters from personal relationships to housing and employment.

The WWA is a campaigning group which works with government departments and the charitable sector to improve conditions for war widows.